What, you ask, is a cabochon?  It is a stone that is polished and shaped (usually in a dome) rather than being faceted.  Frequently, but not always, this cut is reserved for stones that are opaque, or of a lower quality - cloudy or included - but with good color.  Star or cats eye stones are also cabochons - because if the pieces were faceted, the star would not show. 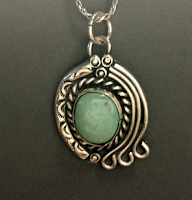 I have a couple of favorites in my collection - each from a different great aunt.  The first is a single piece from a squash blossom necklace.  My mother's Aunt Hattie took pieces from one of the many in her collection and had them made into pendants for her nieces.  I've had this one since I was a teenager. 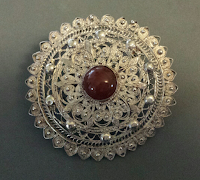 The other is a an Armenian brooch with a carnelian cab, that my father's Aunt Bea (yes, I had an Aunt Bea) acquired when she was traveling in Israel in the 1980s. I love dark red stone and the hand-worked silver that looks like lace close up.

I'm thinking about cabs because I have signed up for Creative Side Jewelry Academy's eight session 101 Jewelry Fabrication Class later this month.  To say I am excited is an understatement!  After taking weekend classes in lost wax casting and precious metal clay (PMC) - I'm going to be able to spend 32 hours over four weeks learning bench jewelry skills.  The result - according to the course description will be "6-7 projects: rings, bracelets, pendants or earrings in sterling silver, copper and brass."

One of the things we will do is work with setting stones using two techniques - bezel and tab - setting.  This photo shows examples of each - and is a clue as to why I am thinking about cabochons.

For these types of projects, opaque stones are far better because there is no light coming through the back of the piece.  Clear, faceted stones benefit from open settings that allow light to pass through and bounce among the facets to create sparkle.  Opaque cabochon stones can be set against metal and not lose any of their beauty.

I've been trolling jewelry sites looking at cabs - and the range of ideas, stones, sizes - and prices - is almost endless.  One of my favorite jewelers, Cecile Raley Designs, sells gorgeous gems as well as finished items.  She's got two listings on her site for 4mm cabs - one for a pair of moonstones ($40) and one for a pair of emerald cats eyes (almost $400) - just as an example.

I'll definitely be working in the $20 per stone range for these projects, but it's fun to look at gorgeous gems like these emeralds.

I'll certainly be writing a blog post, or two, about the classes - but if you want to follow along in real time, keep an eye on my instagram where I'll post pictures along the way.

I'm an android, not an iPhone, person so until I read about it recently in the New Yorker I was unaware that Apple was introducing a "Rose Gold" version...and really, the article is not so much about the shiny new phone, as the return of the copper and gold alloy itself. I love Rebecca Mead's description of the precious metal - she says "in appearance rose gold is warm and flush - what yellow gold would look like if it suddenly suffered an embarrassment."


I do love the warmth of this metal, and was delighted to see it come back a few years ago.  Since its return I've added a number of wonderful pieces in my jewelry drawer.  Some I've written about before - like my Rebecca Minkoff watch with its rose gold face, or my lovely Tiffany hearts.

I mention Tiffany, not only because of my rose gold pendant, but because in celebration of the iconic brand's 175th anniversary, they introduced a new rose colored metal called "Rubedo".  According to Tiffany, it is a "new precious metal", a secret alloy priced lower than gold, and they claim, easier to work with.  Other jewelers and materials scientists weren't sold on the "new" part, but it certainly made for some lovely pieces and an effective marketing campaign.

I really like the combination of warm rose gold and the cool, bright white of silver.  That's at least part of what drew me to these Elizabeth and James "Geodesic" earrings.  Although they are longer than most of the drop earrings I usually wear, I loved the shape of these so much, I stepped out of my comfort zone a little bit - and I'm glad I did, because I actually where them a lot.


Without intending to, I recently added another "geometric" piece to my collection - this time from Stephanie Maslow's Modern Rocks collection.  It will come as no surprise to regular readers that I was drawn to her "Emerald Facet" necklace - and I chose it in rose gold.

Kind of like leopard print - I like rose gold pieces as an accent - you don't want to have too much of a good thing, so I tend to chose either a necklace, or earrings - but not both. 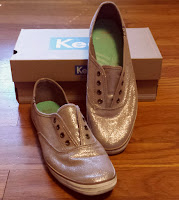 In the case of rose gold, I haven't just limited myself to jewelry - my summer purse (from Stella & Dot) is a lovely shiny pink, I even have a pair of rose gold Keds.

So much to do, so little time - grabbing my bag and my kicks - and off I go!

We are pet people.  More than once I have said that I'd like to be reincarnated as one of my critters.  Our animals lead very plush lives (go ahead and groan), with no responsibilities other than to wag their tails or purr when we rub their ears.

Where dogs are concerned, we have always had spaniels.  As a child, my mother had a springer, Penny, who would sneak into  her room at night and get under the covers at the foot of the bed.  Even though the dog was NOT supposed to be there, my grandmother would pretend not to notice, and let her stay.  Penny was the first in a long line of over-indulged dogs.


My mom was a dog person through and through. I have a great pair of earrings that belonged to her - I suspect she acquired them from the New Yorker Magazine catalog, as they are silver renditions of dogs drawn by their famous cartoonist, James Thurber.


The old man of our household is Max, the cocker spaniel, who is going on 16.  Since the kids left home, he is pretty much my constant companion, hanging out under my feet when I work (or try to do anything in the kitchen).

My husband, and by extension my kids, are cat people...so we have cats in our menagerie as well.

Our first cat was a grey tabby with great eyes - one brown and one green.  We didn't start out to have a cat - but he had been abandoned and showed up on our back porch.  I felt sorry for him and put out a bowl of milk - and posted a "lost cat" message on our neighborhood email list.  When, after multiple postings (and feeding him high dollar cat kibble because my husband said I couldn't keep giving him milk) no one claimed him, he claimed us.

He showed up about the same time we adopted our dog, as a puppy.  So - we named them as a pair - Max and Agent 99.

99, as we called him, was an outside cat, but when it was cold or he needed a check up he allowed us to be his humans. 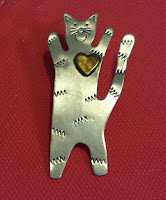 I don't remember where I spotted this pin - but it made me think of Agent 99, so I bought it.  He would leave "gifts" at the back door for me.  He wasn't a particularly social cat, but he had a really big heart.

When Agent 99 died, both my daughter and the dog moped, terribly.  So, despite not being a "cat person" I agreed to another cat.  We adopted MoJo, an orange tabby.  We refer to him as the "tabby spaniel" because he grew up following Max around, he really does behave more like a dog than a cat. They are best buds, and are happiest when they are hanging out together.

I spotted this pin in a catalog, one that I flipped through, and probably would have tossed directly into the recycling except that this it reminded me so much of Max and MoJo, I knew I had to have it. 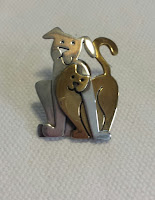 I'm really grateful for my furry friends, even though sometimes I feel like my primary job is "critter concierge"...let one in, let the other one out, fill the water bowl...without them around, my empty nest would be entirely too quiet. 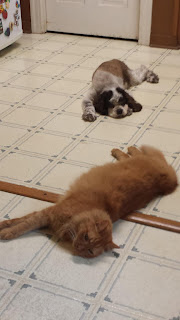 The sound of the dog snoring, or the cat purring, is just enough to keep the silence at bay, and keep me from feeling lonely.

As we meander through these last dog days of summer, I hope you find some time hang out with a friend or catch a cat nap. 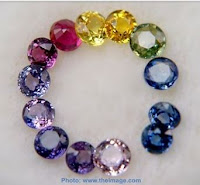 Fall colors may mean foliage in the northeast, but here in Central Texas the best I can do is the variety in September's birthstone, the sapphire.

Not only is the sapphire one of the four ancient precious gems (the others are diamond, emerald and ruby) - but it is one of my favorite stones because of its wide array of colors. Sapphire is the gemstone variety of the mineral corundum. With a hardness of 9.0 on the Mohs scale (only diamonds, with a score of 10.0 are harder) sapphires are widely used in industry as well as jewelry. 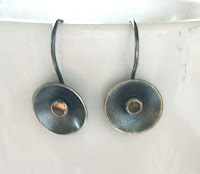 Although sapphires are commonly thought of as blue, they also come in shades of yellow, pink and orange. Variations in the color of sapphires are the result of trace elements including iron, aluminum, titanium, copper or magnesium.  When corundum is red, it is classified as a ruby rather than a sapphire.

I have two pairs of sapphire earrings that are particularly special - they were made for and given to me by a friend just as I was starting this blog.   One pair contains blue sapphires, and the other yellow.  They are great examples of how changing the stone - while keeping everything else the same - can make a difference in the look of a piece of jewelry. 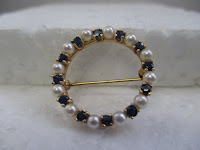 Another of my favorite sapphire pieces is a much older and more traditional piece - a classic circle pin with pearls.  I bought it for myself with my first "real" paycheck, and 30 years later I'm glad I did. I can put it on a sweater or jacket lapel and dress up my entire outfit.

Some of the most beautiful sapphire pieces I've ever seen come from Austin based C. Kirk Root Designs.  While many of their designs focus on Texas themes, I am particularly enamored of their wildflower jewelry - bluebonnet and paintbrush designs - featuring blue, red and yellow stones.  The bluebonnets, in particular, are on my wish list.

If you or someone special has a September birthday, I've put together some lovelies on Pinterest, too.

Here's hoping that just as the color of September's birthstone varies from warm to cool, so will the weather - bringing fall to Texas before the month's end.