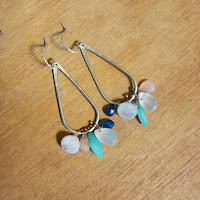 I had coveted a pair of these dangle drop earrings from Metalsgirl for a long time, and when I saw them at Blue Genie, last December I snapped 'em up. Then I posted them on Instagram, and my sister in law loved them, so I snagged a bright colored pair for her, too (which made her very happy). 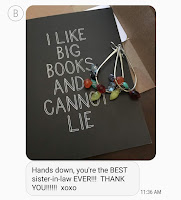 As my new earrings went into heavy rotation (as in they never really got put away) I started thinking, "I need a faceted moonstone pendant to go with these"

Not too long after having that thought, one of the lapidary artists I follow on Instagram, posted a lovely faceted moonstone cabochon, and I ordered it. 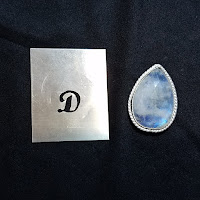 Once the stone arrived, I had some time to think about what to put on the back, because I was still almost a month from returning to the bench.  I decided to put a "D" on the reverse, and call it..."Facets of Myself".

When I finally went back to the studio, late in January, my friend and wonderful instructor, Rita Marie Ross, said "that's a pretty stone - and look at how the blue comes out when you put it on a black background". 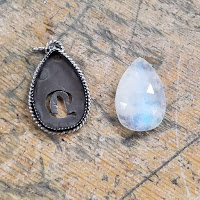 This kind of interaction is why I love working in a communal studio. In that moment of serendipity, I learned a new trick - and it makes the stone look AMAZING!  On my own, I never would have thought to put the stone on something black (in this case, it was a dark phone screen).  To achieve this effect, I decided to darken the inside of the setting with Black Max (my favorite patina).

I love the end result - and as always, I'm excited to have learned something new.  I imagine I'll be wearing these pieces a lot, and using this technique in the future. 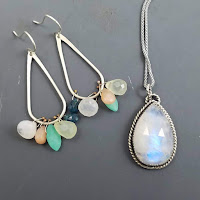 Posted by Debra Haas at 8:00 AM No comments: 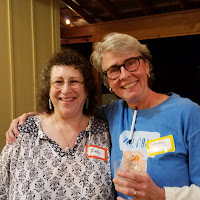 This is me - with my friend Dorsey. We've been friends a long, long time. We met as undergraduates at the University of Virginia, where we were both studying religion (she as a major, me as a minor).  When we graduated, we went our separate ways - or so we thought - until one evening just a couple of years later, we discovered that we had both moved to Austin, at almost exactly the same time.

Dorsey spotted me first, I was having dinner with my Dad - she walked across the restaurant and said "Deb, what are you doing here!?"


I had come to attend graduate school at UT, and she had come to open Eastside Cafe (which closed at the end of January after a fabulous 31 year run) - one of the first eateries to base their menu on locally grown and sustainable agriculture.

After years of running the garden at the restaurant, Dorsey left Eastside to establish HausBar Farm - where she and her wife Susan run a sustainable urban farm and a darling guest house.......which brings me to the ducks, and a very special goose, named Gustavo.

As Dorsey tells it, when Gustavo arrived at the farm as a gosling, it was clear he was no ordinary goose.  He is a charming and gregarious bird - he talks to people and other animals, he likes to be held and loved on, and he has become HausBar's official ambassador.  Whenever there are visitors, it is Gustavo leading the tour. 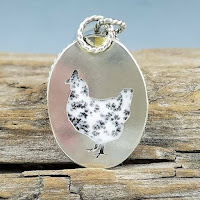 He is such a special goose, that he, Dorsey, and her mom Barbara, have written a book - On Gustavo's Farm.

It tells the story of his life on the farm - helping to raise ducklings, hanging out with his pals the donkeys and rabbits, how everyone gets along, despite being so different. 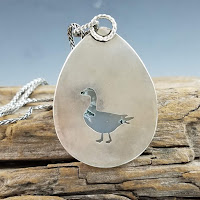 I was lucky enough to attend the launch party for the book, and I thought my speckled hen pendant would be the perfect piece of jewelry to wear.

Dorsey liked my pendant so much, that I offered to make one for her with a goose on the back.

We chose a lovely moss agate for her piece - the colors echo the white and gray in Gustavo's feathers and the verdant greens of all the things that grow on the farm.

It is always a joy to make a custom piece, especially for someone who has been my friend for my entire adult life. I say that every piece of jewelry has a story - but I think this is the first time that the story comes from a book by and about a friend.

If you have a child in your life, I encourage you to follow the link above to Gustavo's page and buy a copy (or two or three) of his delightful book.