...Ellsworth Kelly's Austin, that is.

When my daughter was home earlier this year, we visited the installation of Ellsworth Kelly's chapel at the Blanton Museum on the University of Texas campus.  It was awesome and inspiring.

The chapel is permanent, but the exhibit of his works on paper and canvas closed at the end of April.  I'm so glad we saw it, because it was filled with bright color, including studies for the glass he would use in the building.

The windows in the chapel are incredible. The colors are intense, beautiful and throw light on to the floor of the building as the sun comes through.

I was especially drawn to the one with the "tumbling squares", which is what he calls the ones set at varying angles. I liked that while being off kilter, they are very precisely arranged. 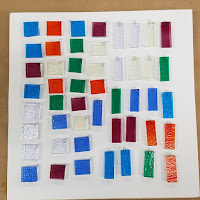 My daughter went back to school, and I went back to the studio...but I kept thinking about those jewel toned windows...so I decided I would try making a batch of earrings that reflected the design of the chapel.


I thought "what if I made singles?", tumbling square and long bar earrings that could be purchased individually to mix and match in the way each window is a little bit different from the one next to it. 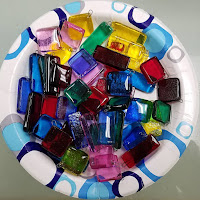 I filled a kiln shelf and waited to see how the pieces would look after they were fired...and remember those "striker" glasses I wrote about...that's what the pale lavender and yellow ones are (they came out of the kiln pink and bright yellow).

I was thrilled!  The baubles look - just as I had hoped -  like little stained glass windows!

So I made dozens of earwires, sent photos to the manager of the Blanton museum shop and crossed my fingers.  I had an initial positive response, then things slowed down because...summer...but I am hopeful that they will eventually find their way into the jewelry case.

Also, because summer, I'm taking a break for the month of August.  If I have an update on the Blanton shop, I'll let you know when I get back. 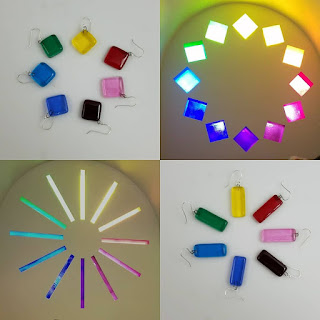 Posted by Debra Haas at 9:59 AM No comments: 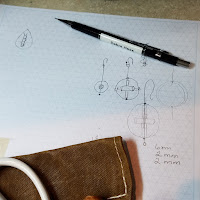 On the last day of class, De wanted me to think about things that move in multiple directions...and told me to look online at more examples of kinetic jewelry.

After a couple of rounds of me asking "what about this" and being met with a response of "nope, too simple", I decided to start doodling as I looked...

...what I came up with was a pair of earrings with tube set stones that spin on a wire, inside a ring that hangs on the same wire.  I got a nod - it was an acceptably complex project. 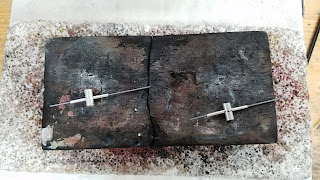 First, I had to decide how big I wanted the circles to be, then I had to calculate the sizes for the pieces of tube.  The horizontal tube needed to be long enough to set the stones, and short enough that it still turned inside the ring.

The vertical pieces had to fit between the top and bottom of the ring so that the wire could thread all the way through (essentially a very long tube rivet) and hold the pieces together. 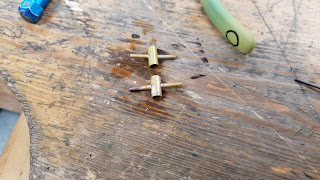 After that, it was frankly, a pretty straightforward process to assemble them - although there was still a fair amount of work to do...like setting the stones in the tubes before threading the wire through them.

I hadn't expected to revisit tube setting stones (another 201 skill) but I'm really glad I did...and like so many of the other techniques that seemed difficult the first time, I was surprised at the ease with which I could do them now.

I chose 4mm blue and white CZs - one in each earring - and used a vice to hold the tubes in place while I drilled them and set the stones. 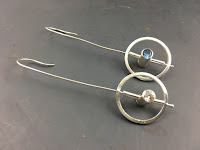 I decided to use my first day back in the studio after class to try my hand at using my new skills without the benefit of having De around.  I had a good day - tube setting a small opal on a riveted bail - with the stone covering the front rivet.

I don't expect to add riveted bails or tube settings to all my work going forward, but it's fun and very satisfying to know that if I want to, I certainly can. 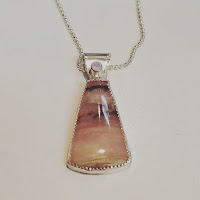 Until next time.
Posted by Debra Haas at 1:42 PM No comments: