After a detour for wildflowers and Passover, I'm back to glass...

The glass we having been using in my fusing classes comes from a company called Bullseye, based in Portland, Oregon.  They are not the only makers of glass that can be used for fusing - but it is one of their specialties.

Not surprisingly - you can't fuse just any old glass - and even when it is made for firing and fusing, it's not all compatible.  Even glass from the same company isn't always a match - so it's important to understand some of the science behind the glass.


All fusible glass has a coefficient of expansion (COE) - which refers to the rate the glass expands (and contracts) when it is heated (or cooled).  The two most common types of glass are COE 90 and COE 96. You can't mix them - so you work with one or the other. We have been working with COE 90.  I have some COE 96 shards that the Salado Glassworks folks gave me - but I'm saving them for another time.

In order for glass to be successfully fused (in a kiln) there is a very specific schedule for heating and cooling the pieces so that they will bond without breaking.  Heating or cooling too quickly can stress the glass, and ruin all the hard work that went into creating a piece...and the bigger the finished piece, the more careful you have to be with the timing.

COE isn't the only thing you have to think about when pairing glass pieces for fusing...because what you see when you look at a sheet of glass isn't always what you get.

Just as many stones get their colors from chemical compounds, so does a lot of colored glass.  For example both turquoise and chrysocolla get their distinctive blue shades from copper.  Well, lots of blue-green glass does, too.

Pink and purple glass get much of their color from lead, and reds, yellows, oranges and some greens contain sulfur or selenium.

So, it's really important to check to see if the sheets of glass you are using are reactive - because if they are, and you aren't careful - you are likely to end up with something very different that what you planned.

For some glass, heat has no impact on the color - what you see when you pull it off the shelf is what you will get when it comes out of the kiln. Other pieces - called strikers - will change color, and the hue and depth of the change will vary based on how much heat is applied.

Some of my classmates are very spontaneous - mixing and matching, experimenting and taking their chances - which is great, but it's not me. I've been spending a fair amount of time before each class looking at the Bullseye catalog and making a plan for each piece. This should not come as surprise to anyone who knows me - or has been reading the blog for a while. I am a planner to my core. 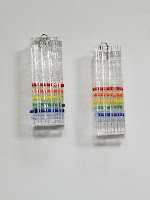 One of the first things I'm planning with respect to my jewelry is fused glass bars for earrings.  Here's a sneak peek at my first experimental pair (pre-fusing).

Last year, when I wrote about Passover, I began my post by saying...

Ostensibly, this is a blog about jewelry, but you (gentle reader) and I both know that sometimes I write about jewelry, and other times I use it as an excuse to write about something else.  This post is very much in the latter category.

Well, this year my Passover post really IS about jewelry - a very special piece given to me by my dear friend, Don, who - along with his wife - has hosted the first night Seder we have attended for going on 15 years.

From year to year, the number of folks in attendance at the Seder varies - it's been really big (upwards of 30) and smaller (a dozen or so people), but regardless of the size, I take tzimmes and Don pays careful attention to the seating arrangements. Some years we have been seated together as a family, other years we've been spread out - and the idea is that over the celebratory meal we will talk to new people - or at least people we don't see very often.

In the spring of 2015 I had just started taking metalsmithing classes, and had talked about it a little bit over dinner with Don's wife, Sherry and his mom, Jean.

In 2016, Don seated me across from Jean - she remembered our conversation about jewelry, and asked if I was still taking classes. I told her that indeed I was.

We began to talk about a jeweler she knew well - cloisonne master Ricky Frank.  Jean and Don's dad, Peter, knew Ricky's parents and had been friends since their days as college students.

As it happened, Ricky was going to be teaching in the coming week at Creative Side - although I wasn't signed up for his class.  One day shortly after the Seder, when I arrived at the studio, I said hello to Ricky before he started teaching and told him about my connection to Jean. We agreed that it was a very small world, and it was clear that he had a great fondness for her.

I saw Jean at Seder again last year (2017), shortly before she was scheduled to have heart surgery.  She was very pleased to hear that I had connected with Ricky.

Sadly, the surgery turned out to be more complicated that expected - and she never recovered.  My heart broke for Don, and his family.


This year, when we arrived for Seder, Don said he had something he wanted to "pass over" to me - it was this beautiful Ricky Frank pendant that belonged to his mother. I was so honored, and moved by his gift that honestly, I'm still processing the depth of my emotions even as I write this post. 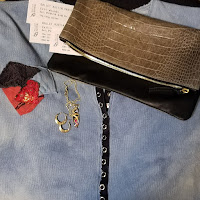 I also knew immediately that I would wear it with my mom's gold hoop earrings - which I wrote about in one of my earliest posts.  In fact, just a week after receiving the pendant, I wore it with the earrings, to the ballet.

Every piece of jewelry really does tell a story - and the story of this pendant is one of lifelong friendships and deep connection. It is truly a treasure.

Posted by Debra Haas at 9:40 AM No comments:

I love spring - and not just because I hate winter. The sun comes back - the days get longer and warmer, and in Central Texas, mother nature paints virtually every patch of open space with vibrant color!

It's starts with deep purple mountain laurel, which smells like the most fragrant grape kool aid you can imagine when it blooms.

Jewelry inspired by wildflowers is certainly nothing new.  I have vintage pieces from long time Texas jewelers Jeep Collins and James Avery that belonged to my late mother.  More recently I discovered the work of fellow Austinite (and fabulous instructor) Vickie Hallmark.

When I first spotted her mountain laurel earrings, I knew I had to have them! Then, after taking a precious metal clay class with her, I asked if she would make me a pair of bluebonnet earrings - and she did.

If you follow my daily earring posts on Instagram, you know that both of these pairs are in regular rotation - especially this time of year. 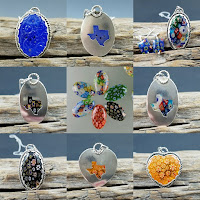 Inspired by the landscape, these jewelers, and my love of the saw - I started creating my own variation on the wildflower theme -  pendants made from millefiori and vintage glass with a Texas cut out on the back.

I'm excited to report that a few of my Texas themed pieces are now available at Russell Korman Jewelers here in Austin. I have a long relationship with these folks, and was thrilled when they asked me if I would be interested in having my work in the store.

Spring is definitely a time of new beginnings - and I'm excited to see where things go from here.  I am so grateful to everyone who has supported me by liking, commenting on and sharing my posts, reading the blog - and, of course, buying my jewelry.

It definitely takes a village, and I love the new creative home I have found.

Posted by Debra Haas at 8:44 PM No comments: