Time passes more quickly once you become a parent...I know this because it seems like just yesterday that our youngest was born, and yet she will graduate from college in less than 100 days.

I was thinking about this when I pulled out one of my many "mom" necklaces to wear on a quick trip to Boston a couple of weekends ago.

I went to visit our daughter who has been criss-crossing the country to do interviews at graduate programs. School was on February break, and she had a few days off between trips. I thought it would be nice to squeeze in a little extra rest, some good food and a few hours of fun.

Rather than having her schlep home - I decided to do the traveling.


As if it to remind me how time flies - and how much things change - this picture popped up in my Facebook memories reminding me that it's been almost exactly five years since she and I made our initial trip to Boston to look at colleges. 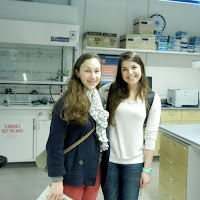 I on the other hand - would not set foot in a jewelry studio until almost two years later!

During her time there, she has come to love Boston - the food, the arts and culture, and the extensive if not always easy to navigate system of mass transit.

On previous visits she has shown us the city and introduced us to some of her very favorite places.  We crammed several of them in on the last afternoon of this visit.

then on to the Museum of Fine Arts, because I really wanted to see the "Past is Present" exhibit of contemporary jewelry based on ancient themes.


I have to admit, that based on the previews for the exhibit - and that it was underwritten by Cartier - I expected it to be bigger.  There were only about 70 pieces - but it was still very interesting.

The first case focused on ancient themes that had been recreated by contemporary jewelers - and featured this scarab brooch by Cartier - placed next to a very similar Egyptian antiquity.

There was also a case full of jewelry with pieces that depicted images of travel destinations.  I really liked these, because as I have written before, I don't wear t-shirts, but I love to buy jewelry as souvenirs. 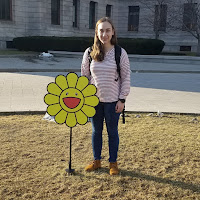 I didn't see anything in the museum shop cases that I wanted to take home - but that's okay - the best souvenir from this trip was the chance to spend a sunny afternoon making memories.

Until next time.
Posted by Debra Haas at 6:22 PM No comments: 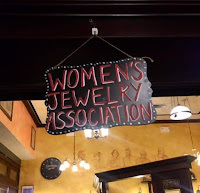 When I took Marlene Richey's jewelry business class last year, one of the things she recommended was becoming a member of the local chapter of the Women's Jewelry Association. Recently I did just that - and attended my first meeting. It was wonderful not only to get to know the women behind so many of the brands and stores I have shopped for years, but to be in a room full of smart, creative, empowered women.

That's what WJA does - it brings together women in the jewelry industry (which, like so many things, has been traditionally male dominated) and provides opportunities for networking, mentoring, business development and training. 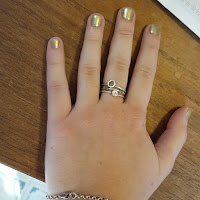 The Austin chapter is relatively new - and I'm excited to be a part of it.

It was fun to visit with Sara Dominguez and Elizabeth Gibson of Eliza Page - where I have shopped for years - most recently for this sweet Hamsa ring that was one of my daughter's Hanukkah gifts.

I also met Leigh Navarro, whose line, Leighelena I first purchased years ago at Blue Genie, and Jodi Rae Brownstein' whose bright colored druzies and bold stones have always caught my eye!

Amanda Deer, whose East Austin studio is home to both her store front and work space. Not too long ago, I stopped by her charming shop. Her jewelry is fun and delicate - and I see her pieces in my daughter's future!

Haley LeBeuf, whose architectural jewelry has found it's way into my heart and on to my ears - because as I've said so many times before - there are NEVER too many earrings.

Haley was wearing these included crystal drops from her new "Violet Crown" line at the WJA event - and I have since added a pair to my own collection.

A couple of weekends after the meeting, Jodi held a "Tiny Tucson in Austin" gem sale. I went and had a wonderful time!  I bought some beautiful cabochons, pearls for the birthstone series I am doing with my wind chime earrings, and got to visit with other Austin jewelers. 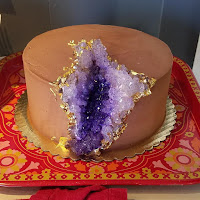 In addition to all the pretties for sale - Jodi had an amazing cake - which was as delicious as it was beautiful.


So far, 2018 is off to a really good start - and I look forward to sharing more of my jewelry adventures with you! 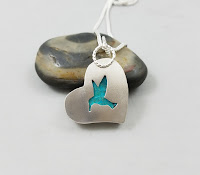 Gentle readers - I know some of you like winter, but at this point, I'm just hunkered down and waiting for spring.

Over the holidays we spent some quality time with our kiddos at my mother in law's house.  Because we are in Texas, she has birds in her yard all year long - and it was on a previous visit to her house that I was inspired to put a hummingbird on the back of one of my pieces.

No sooner did I post a photo of this chrysocolla pendant than I had a message from someone asking if it was already sold (it was not). 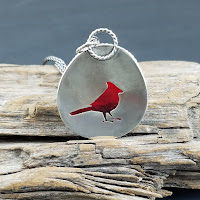 When I was visiting my college roommate this past summer, we spent several wonderful hours sitting out her lovely deck watching all varieties of feathered friends came to dine at her well stocked bird feeders.

There is a pair of cardinals who make their home in one of her big trees and they appeared every evening, almost like clockwork, for their evening meal.

Thinking about this pair - and the folklore that surrounds cardinals (some people say when one visits, it is the spirit of a loved one who has passed) - I decided that it would be perfect for the back of this wonderful piece of vintage red glass.  I named it "The Visitor" - and it is available in my Etsy shop. 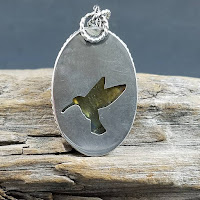 I did another hummingbird pendant, this one a labradorite - and again - it got snapped up as soon as I posted a photo of the piece in progress.

Then there's the "Happy Bird Day" pendant.  When I first posted a photo of this fabulous rainbow fluorite, a friend of mine went crazy over it...she wrote "LOVE, LOVE, LOVE this shape and stone"...and I thought, well - I know what she's getting for her birthday!  I especially like the way a shadow of the cut out is visible through the translucent stone. 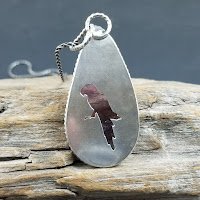 My most recent bird may be my favorite.  It's a speckled hen. As soon as this dendritic opal arrived, all I could see were black and white feathers and I knew that I had to put a chicken on the back.

I realize that chickens don't fly - so they aren't like the other birds in this group - but it's my blog so I can put it in here if I want to. 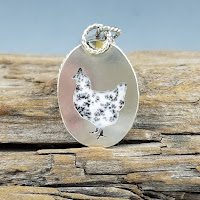 Even though most people don't see them, the backs really are my favorite part of my pendants and cutting them out is the part of the process I enjoy the most.

If you have a favorite bird, let me know - I'd love to tell your story.