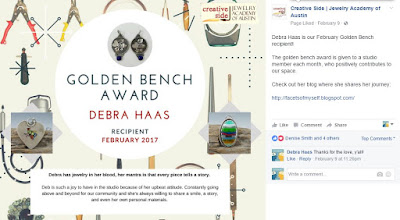 Last month, I walked into the Creative Side studio ready to get to work - and the staff stopped me, pointed to a certificate in an acrylic easel in the lobby and said "congratulations - you're our Golden Bench Award winner for February."

They put up this great post on Facebook, I received a gift certificate, but mostly, I got the warm fuzzies.

For years I worked from home - which was ideal when I was driving the mom bus - but there were a lot of days I didn't interact face to face with another person from the time I dropped kids off in the morning until I picked them up again after school. 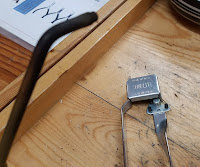 Now that I'm no longer on the carpool team I have an extra 30 or so hours of free time each week - and I love spending that time at the studio. Not only do they have all the special tools and products I need (and would be a fortune to set up at home) it's wonderful to be around other people.  There's a great creative energy that happens when people share a workspace...I feel like I really found my place... 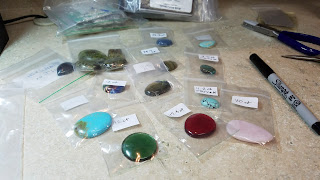 I love being able to spread out my stones, plan my pieces, and ask my benchmates what they think.  I appreciate their insights, suggestions, and encouragement as I work.

But mostly, I am grateful for all the wonderful people that have come into my life since I walked through the studio doors for the first time.

Until next time.
Posted by Debra Haas at 9:51 AM No comments:

Email ThisBlogThis!Share to TwitterShare to FacebookShare to Pinterest
Labels: Creative Side Jewelry Academy

We live on a beautiful tree lined street in an old central Austin neighborhood...before it was subdivided, the property was a dairy farm.  At the end our block is a small Epsicopal church, and in addition to their main building and fellowship hall, they own a historic two story Victorian home known as the "Wright House".

We moved into our home in the early 1990s, and became neighbors with the Wright House - and the non-profit HIV/AISD wellness center housed there.


Both the church and the wellness organization grew over time; the church took back the house as office space, and the Wright House organization moved to larger quarters, but kept the name.

By now you know that this story has something to do with jewelry - so here's the connection - one of the most satisfying things I can do with my jewelry is donate a piece, or the proceeds from a sale, to a good cause...and this time that cause is the Hill Country Ride for Aids Wright House team.

Hill Country Ride for Aids (HCRA) is a great organization, and my husband - an avid cyclist - has been participating for a few years, and rides with Team Wright House. 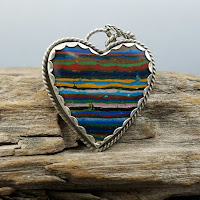 Held every April, HCRA is the largest fundraiser in Central Texas for HIV/AIDS services. The Ride raises funds that are given directly to ten Austin/Central Texas nonprofits who help those in our community affected by HIV/AIDS. Since it's inception 17 years ago, the Ride has raised over $8 million. Each team holds fundraisers, and this year I've created a special pendant which will be auctioned off on March 25, at the Team Wright House event being held at the Salado Glassworks. 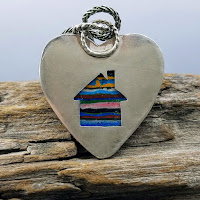 I knew I wanted to create a special Love Note because hearts are an important theme for the HCRA organization and the Ride. I chose a Rainbow Calsilica (the rainbow flag being the emblem of gay pride and unity) and put a house on the reverse.

As I've said before - creating art for good helps me feel like making jewelry is about more than just pretty things - it's a way for me to make a contribution to causes and organizations that matter.

I encourage you to learn more about - and contribute to - HCRA, the Wright House, and the other organizations supported by the ride.

Posted by Debra Haas at 9:08 PM No comments:

When I took my second fabrication class, whatever I lacked in skill, I made up for in ambition.  The class was in March, and my husband has a March birthday (this year it ends with a zero!) - so I thought, I'll make a piece with a March birthstone - aquamarine - in his honor. 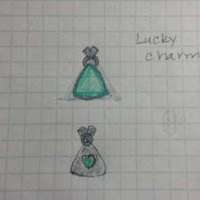 I sketched a design and bought a stone (a triangular cabochon, because setting a stone with corners was our first assignment), but there were some things I didn't account for...


...including that we were going to do this practice piece in a single evening, and that the smaller the stone, the trickier it is to set.


So there were things in the original sketch that didn't make it into the finished piece..and it's the only pendant I've made that didn't have a cut out on the back plate.  There was a little heart in the sketch - but not only was there no time to do that, I really didn't have sawing skills to do something that small quickly (yet). 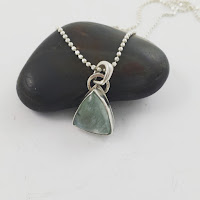 It turned out okay, but I was feeling emboldened after resetting my thunderstorm labradorite, and decided I'd pop the stone out and make another new setting. 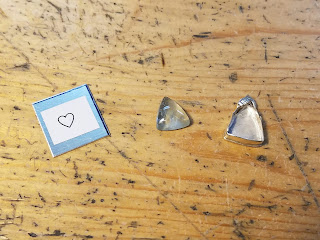 This time, I did put a small heart cut out on the back and used serrated wire instead of a plain bezel.  I really like the look that the fancier bezel (also called gallery wire) gives the finished pieces.

The reworked piece makes me happy for so many reasons - for starters - my work is just cleaner than it was a year ago. 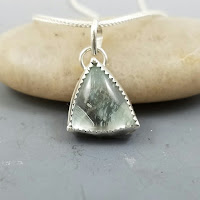 The corners are sharper,  the jump ring and bail are more appropriately sized to the pendant, and the opening on the back lets in light, which shows off the stone.

Both of my instructors for 201 happened to be in the studio when I was resetting this stone.  They smiled, said "good job" and encouraged me to keep making mistakes - and fixing them - because that's the best way to learn.

No project is ever going to be perfect, but every day in the studio gets me a little closer. 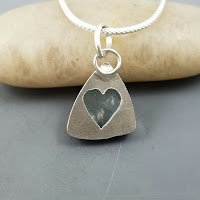 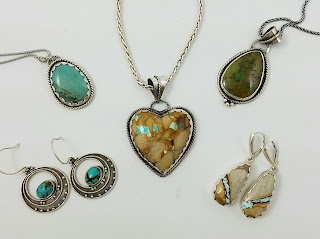 It is truly one of my favorite stones - and the more I work with it, the more finished pieces I want to hang on to!

The copper rich stone was first called "turquoise" by the French in the 17th century, because it was first brought to Europe from Turkey.

Turquoise is mined all over the world, and has been used in jewelry making since ancient times. It one of three blue December birthstones.

The first piece I made in argentium, used a piece of green turquoise.  I didn't need any more stones, but there it was in the tray, and I picked it up and couldn't put it down...and so it began...

After I joined the Cabs and Slabs group on Facebook, a whole new world of possibilities opened up.  I had no idea how many varieties of turquoise existed...but I've learned a lot!  The lapidary folks are fabulous - and I'm so glad to be part of their group. I've bought some beautiful stones - and often, the seller will include a "bonus" - an irregular or smaller stone, along with the piece I have purchased. 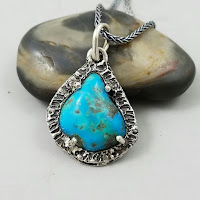 I put one of those bonus stones to good use in my wax class - and still others have became earrings (all sold) or rings (which are also posted in the shop). 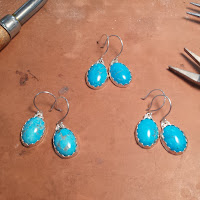 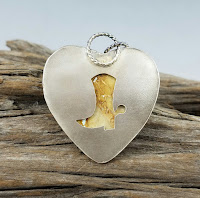 Currently, I've become very enamored of  "boulder" or "ribbon" turquoise.  When a lapidary artist gets a piece of rough that has turquoise running through the surrounding rock, they can cut it to feature the veins of blue.  I fell in love with this big heart online, and was not disappointed when it arrived. I'm really happy with the pendant, and especially pleased with the cut out on the back...and because every piece of jewelry tells a story, they all get a name...this one is "West Texas Waltz".

Even with the best organizing system possible - I don't have the room (or budget) to keep every piece I make - so like my children, I have to send them off into the world.  So watch this space, my shop and my Instagram feed - for lots more turquoise! 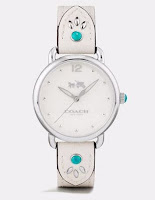 PS - I write my posts at least a couple of weeks in advance - and since writing this one, I was able to end my Nordstrom boycott - and the first thing I bought was this watch I'd been coveting...because TURQUOISE!