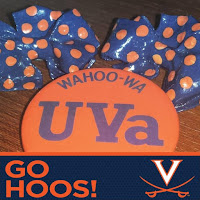 My beloved Hoos made it all the way to the Elite 8, but sadly this was not their year to finish the dance, and they've headed back to Charlottesville.

Nonetheless, I've been watching a lot of college basketball the past couple of weeks – and in that spirit I am writing about hoops. They are one of my favorite earring styles, and as often as not, if you look at #todaysearrings on my instagram feed, it will be a pair of hoops. I have entirely too many to write about all of them in a single post, so I’m just going to share a few of my favorites. 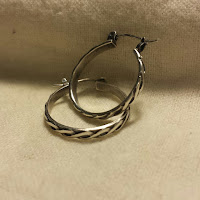 More than any other pair, when I just don’t want to think about earrings, I reach for my Coach huggie hoops.  Chances are if you know me, you’ve seen me wear them. A gift from my mother in law many years ago, I love their shape and size; they are incredibly comfortable.

Lately this embossed wire pair from Quiet Time Jewelry has been in heavy rotation because they go so well with the chain I bought for the pendants I've been making in my metalsmithing classes.  I certainly didn't need another pair - but when I saw them, I liked them so much that I chose not to resist. 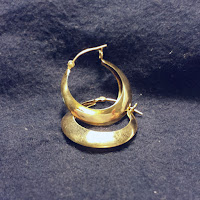 I don’t wear gold jewelry very often – but when I do, I usually reach for this pair of gold crescent hoops that belonged to my mom.  Much like my small silver ones – they were her go-to earrings, and I always get a smile on my face when I wear them. 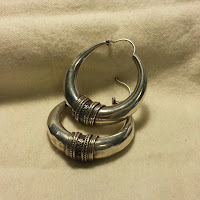 Although most of my hoops are moderately sized – generally no bigger than an inch – when I’m in a “go big or go home” mood, I love these embellished silver hoops.  They are hollow – so they aren’t heavy – and fun to wear.  I bought them when I was still a student at the University of Virginia, from the J.  Peterman catalog – when you still had to fill out a paper order form and mail it in to them – with a check.

Hoop earrings date back to antiquity –  two gold Sumerian pairs, from the Brooklyn Museum are from 2600 BCE;  and a pair from the Metropolitan Museum are from the 1st Century AD.  Both look remarkably similar to my contemporary versions.


For now, I will put my blue and orange bow earrings (that I've been wearing to game watching parties) away, and go back to my hoops...

Posted by Debra Haas at 9:06 AM No comments: 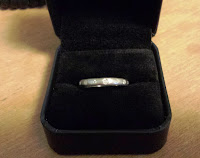 It's been three years this week since my Dad left us - so he's been on my mind a lot.  Unlike my Mom, he didn't wear much jewelry - just his wedding ring. He also carried a pocket watch that my mother gave him when they had been married about 25 years.

I don't have his wedding ring anymore. I had the gold - along with some of the small diamonds from my mother - made into two memory bands for my daughter and my niece.  Once again with help from the fine folks at Russell Korman. 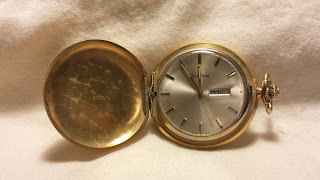 For my daughter especially, who was incredibly close to her grandfather, the ring is a way to keep a piece of him with her all the time.

I do still have the watch.  Mom didn't give it to him on an occasion, but "Just because I love you" - as she had it inscribed on the back. That's how my parents went through their 45 years together - doing things for each other just because. 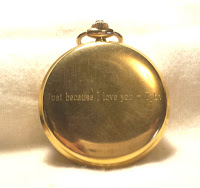 I've also been stopping at a local place called P. Terry's - right across the road from the Creative Side studios - to grab a burger and a milkshake for dinner before I go to my four hour fabrication class that starts at 6 p.m. two nights a week.

Every time I order, I can hear Dad's voice in my head saying "oooooh, a milkshake", because the combo of a cheeseburger and a chocolate shake was one of his absolute favorite meals (I'm sort of partial to their caramel or peppermint versions). 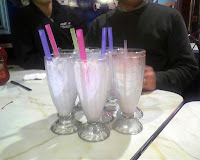 The evening of the day he died, our family out went for dinner - and we agreed everyone should have milkshake. And that was the beginning of a tradition to honor him and keep his memory alive by toasting him with frozen treats.

Something else happened in the days after he died. People began sharing their photos in texts and on my Facebook page with notes saying they were having a shake for him - and me. Now, a twice a year, it has become a tradition to have a milkshake for Granddad.  In October, to celebrate his birthday, and in March to honor his life and memory. 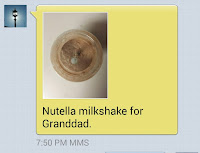 This year I invite all of you, dear blog readers, to join us by enjoying your favorite frozen confection.  Because as the folks at Amy's Ice Creams here in Austin say, "life is short, eat dessert first." 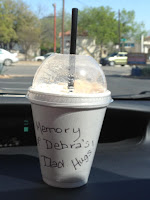 When I realized that March 14 was a Monday, I could barely contain my excitement as I thought..."a Pi Day post!"

Mine is a family of geeks and nerds; scientists, engineers and mathematicians; thinkers and tinkerers.  My father had a PhD in theoretical physics, my mother was a mathematician.  Early in their courtship my Dad gave my Mom a half size mahogany backed K+E slide rule.  My grandparents were perplexed by his choice, but my mother loved it! 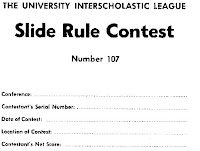 Pi Day is a holiday created for people just like us - and just a couple of weeks ago, I finished a piece of Pi jewelry.

I didn't hesitate when I saw this green turquoise cabochon - I bought it and started to think about what I wanted to do with it.  I loved the color - which reminded me of a granny smith apple - and that was the source of my inspiration...I would call the pendant "Apple Pi". 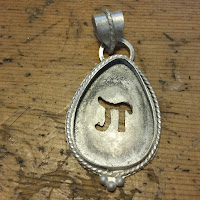 Of the work I've done so far, this may be my favorite piece.  Not just because of the stone, but it is my first piece in argentium which can be fabricated by fusing rather than soldering (I could write another geeky post about the differences between argentium and sterling...but that's not for today).

It's much easier to saw with the bezel up and the flat side of the backplate down, so to make sure the "Pi" was facing the right direction, I had to draw it backwards on the inside of the piece.  I'm really, really pleased with the end result - and now thinking I might make another Pi pendant to put in my shop...perhaps a circle on a square backplate, because we often joke at our house "pie are round...not Pi R Square." 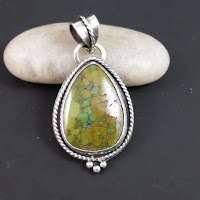 No matter what your preference - apple, pecan, lemon meringue, pizza or chicken pot pie - I hope you find time today to order a slice.

My husband are coming up on a quarter century together. They have been very happy and fulfilling years, in large part because we really do understand each other.  He is more pragmatic than romantic, so the transition from dating to engaged happened before there was a ring.

He made very clear to me that while he had every intention of buying me a diamond, he wasn't going to be the one to choose - that would have to be me.  He said something along the lines of "I want to buy you a ring to wear forever, I don't want you to look at it every day hating it - and waiting five or ten years to tell me you want something else."

I had no problem accepting that - in fact - I was pleased that he understood me well enough to say so, and trusted me not to get upset when he did. I met with diamond brokers and jewelers, priced stones, bartered a little bit - and ended up with a carat-plus G color, VVS1, emerald cut stone in a four prong Tiffany setting.  I've worn it every day for more than 23 years, and I love it.

Even after all this time together, he won't go out and buy jewelry for me on his own - he tells me to pick something out, or gets help from sales staff that know me (and makes sure it can be returned or exchanged).

My good friend Amanda's husband, John, is at the other end of the spectrum. Quite the romantic, John does purchase jewelry for her, and has from the beginning.  When he planned to propose, he bought a STUNNING diamond, and had it put in a simple setting, with the idea that they could go back anytime and set the stone in the ring of her choice.  She said yes, and off they went.


As we all know - life has a way of pushing non-critical tasks to the bottom of the priority list - and that's what happened to the engagement ring.  So, almost two decades (multiple job changes, three active boys, a cross country move, and an upgraded diamond and platinum wedding band) later - Amanda's diamond was still in its original setting, and languishing in her jewelry box.

On a visit to Austin (because that move was to the Pacific Northwest), Amanda asked me if I would go with her to look at new settings for her diamond.  You know I said yes! 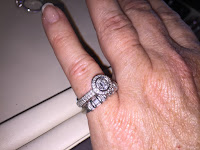 We went to Russell Korman, where Amanda told Brooke (a member of their fabulous sales team) what she was looking for.  She'd given a lot of thought to what she wanted in a new setting - she wanted a bezel setting (no prongs), possibly a raised mount or cathedral shape (to put the engagement stone above her wedding band) and perhaps some additional side stones or a halo.

We discussed a lot of options - plain bands with a halo, channel set bands with a halo, matching the pattern of baguettes and channel stones in her band...and had a grand time pulling settings out of trays and looking at them up against her wedding band.

She kept coming back to a Ritani setting - with a halo and a double row of channel set stones.  It looked really lovely with her wedding ring.


Although she didn't make a purchase that afternoon, Amanda did leave with a good sense of what she wanted - and planned to talk it over with John.


Well, John is a good listener, because for their 19th wedding anniversary (in February) he had the stone reset for her...and I'd say he picked a winner.