What a difference a year makes!  When I first wrote about this gray labradorite - and the pendant I made - I had really just begun designing and fabricating, and I was still working in sterling (now everything I do is in argentium).

I wrote then that "when I saw this stone I had two thoughts...first, that I HAD TO have it; and second that it made me think of a Texas thunderstorm.  The shape is a perfect raindrop, and the color really is like the dark gray of a storm with flashes of lightning."  It still looks like that to me. 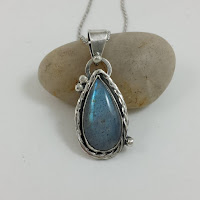 I decided to call it "Thunder and Lightning" and put a lightning bolt on the reverse.  I remember being pleased with pendant when I finished - given my skill level at the time - but since then, when I've pulled it out to wear, I looked at it and decided I wasn't happy after all. It was not because I hadn't done good work - I had, but I've learned so much since then. 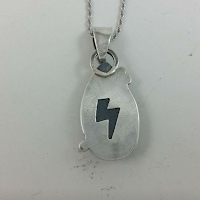 With many, many more hours at the bench under my belt, I could see so many things I wanted to fix - I would just put it back in the drawer.  After doing that a few times, I decided I was going to take the stone out of the first setting and remake the pendant.

There were some things from the original concept that I definitely wanted to retain, like the lightning bolt and the twisted wire around the bezel - and other things that I wanted to improve.

The first time, the point on my bezel was crimped, I had flattened the granules in the process of sanding the piece, the list of newbie mistakes goes on...so... 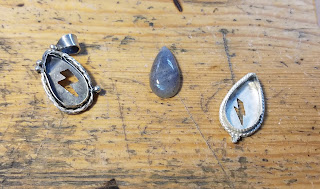 I cut the bezel just enough to pop out the stone, and got busy making a new one - this time in argentium.  I kept the lightning bolt on the reverse, and the twisted wire - but I used serrated bezel wire, to echo the sharp edges in the lightning bolt, and put a small trio of granules at the bottom of the drop. 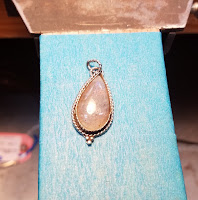 I finished the metal work, then once again added patina.


The result was the pendant I had originally envisioned - when my ideas outpaced my ability.  It's really gratifying that a year (and many hours at the bench) later, I am able to produce the kind of work I really want to wear. 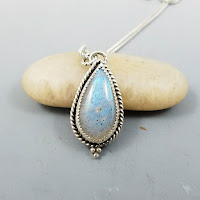 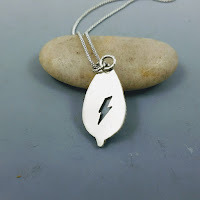 Posted by Debra Haas at 8:18 AM No comments:

I don't know about you - but it's been a month since the inauguration - and I'm still trying to figure out exactly how to cope and what to do...every day seems to bring some new challenge.

I was travelling and unable to attend my local Women's March - but I still wanted to find a way to get involved. I was incredibly moved by the photos from all over the country (world!) with of seas of people wearing pink hats...then I had an idea...a pink pendant that I would sell and donate the proceeds to civil and reproductive rights organization.

I've had a pink mother of pearl heart cabochon in my collection of stones for a while.  It seemed perfect for a piece inspired by the march. 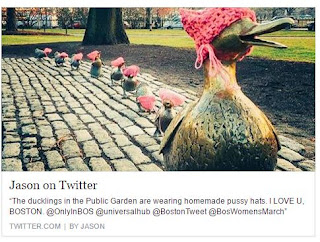 When I got back to the studio on Monday, I pulled out my trusty Green Lion saw and cut a cat out of the backplate for the pendant (a nod to those millions of crocheted pink kitty ear hats...even the Make Way for Ducklings statues in Boston's Public Garden were wearing them). 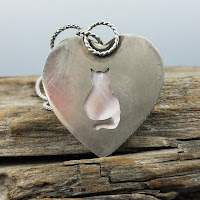 On Sunday, a couple of weeks after the march, I put the pendant up for auction on Instagram - with an explanation that all the proceeds from the sale would be donated to civil and reprodctive rights organizations.  I was delighted by the support I received - and the pendant sold for over $150 - enabling me to make contributions to Planned Parenthood, the Southern Poverty Law Center and the ACLU. 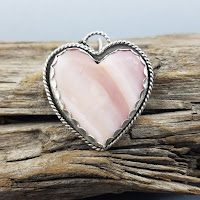 It felt really good to know that I was putting my art to work helping people...so good, that I've decided that I am going to designate some of my future sales as well.

A few items in my shop will be designated as Art for Good, and portion of the proceeds from these sales will be donated to charitable organizations.  One of the items is this hamsa pendant (available now, just click the link) which I am calling "Salaam-Shalom" (the Arabic and Hebrew words for "peace").  When it sells, I'll make a contribution to an organization helping immigrants and refugees affected by the travel ban imposed recently. 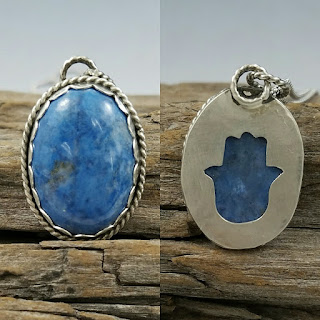 I'm grateful that I can retreat to the bench a few hours a week, and turn down the volume on all that is happening in the world...but feel that it is important to be aware of how lucky that makes me, and use my good fortune to do something to help others.

As I keep saying, now more than ever, art matters.  Go out into your community and find artists whose work speaks to you. Get to know them - and support them - in difficult times they are some of our strongest voices.

On this day before Valentine's Day - I want to say thank you - to everyone who has read the blog, encouraged me, and especially those of you who have bought my jewelry.


The Love Note pendants have been a huge hit...so here is my valentine to you - a few photos of the pendants - some that have sold, and the ones currently in my Etsy shop.


I hope everyone who has one finds as much joy in wearing it as I did in making it... 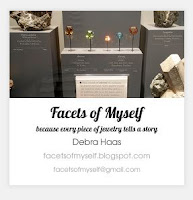 You know you've made it as a blogger (at least locally) when you are invited to attend BlogathonATX as an influencer, as I was recently. It was a blast!

When I started writing the blog in January 2015, it was about a goal - I set out to put up a post every week for a year.  The second year, it was about seeing if I could sustain the effort - I took a few weeks off over the summer - but I still posted weekly for eleven months.  So here I am at the start of my third year...and apparently that counts for something.

What IS BlogathonATX you ask... it's a one day conference in Austin with speakers and workshops open to everyone from complete newbies to seasoned professionals (you do have to register in advance).

If you've been following me since the beginning, you'll recall that I didn't exactly know what I was doing when I started...mostly, I was looking for something to fill my time when my youngest bird flew away (literally, to Boston).  I starting by simply writing about my personal connections to jewelry, topics that interested me, or once I started taking classes, the things I was learning. 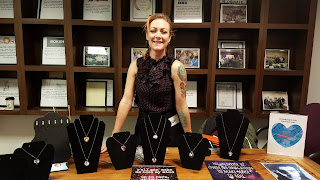 I knew that after attending the conference, I would want to write something, I wasn't sure just what it would entail...but as often happens, once I've come up with a general idea for a post, things fall into place and the blog kind of writes itself.

In this case, it was arriving at the conference on Saturday morning and seeing one of the rooms set up as a jewelry showroom.  To my delight, Jennifer Cunningham of jenheartsart - someone I have gotten to know online, but had never met - was there!

Not only was she selling some of her great jewelry, but she was making hand lettered magnetic name tags for the bloggers in attendance - and of course I got one! 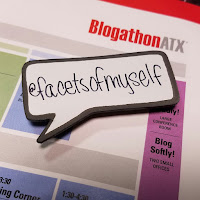 I've written about Jen before, she is one of the many activist artists who use a portion of their sales to support social causes.  It's artists like Jen who inspired me to think about ways to use my art for good (more about in next week's post).

I also met Maruxa Murphy, of Perky Perky Coffee.  In the course of chatting about what brought us to the conference, I told her that I had a "coffee lover" pendant in my Esty store - and before the week was out, her husband had purchased it for her! 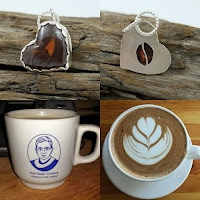 I loved attending Blogathon - it was an opportunity to engage with other bloggers covering a wide range of topics and experiences.  I learned that I'm doing a lot of things right (probably because I've been writing professionally for a long time) - and there are some things I can do better.

Perhaps most importantly, I was able to connect with people who have both a message, and a mission, to share information and make the world a better place.  Given all that is going on - politically and socially right now - that felt like a very big deal.

Posted by Debra Haas at 7:45 PM No comments: