As I sat down to write my last post for this year, 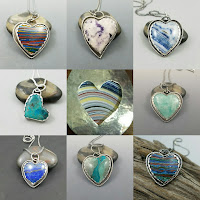 I looked back at my final entry for 2015 - I was surprised at how much it still resonates:

The last few weeks have been difficult – just watching what is going on here at home and around the world – and more than I expected it to be, the blog and jewelry making have been a source of beauty and comfort for me.  There is something so affirming about being able to work with my hands and make art – and it has given me a way to escape reality for a few hours at a time.


Now, perhaps more than ever, art matters...both as a way to bring beauty into the world, and as a means of seeing things through a critical lens.

Go out and find the artists in your community - get to know them, support them, and perhaps even join them.

PS - I'm going to take the first couple of weeks of January off, while my daughter is home from college, but I'll be back.

Last week I suggested that if you were in Austin and had time, you should swing by Russell Korman for the Ippolita trunk show...and here's one of the reasons why...when jewelry reps travel for these shows, they often bring "hidden gems" (ha, ha, ha) with them that you won't find in regular store stock or online. 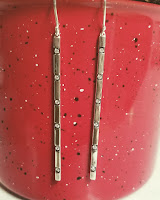 I told my husband I was going - and he said "oh, good - make sure I buy you something really nice for Hanukkah and our anniversary".  Only too happy to oblige, when I spotted these silver and diamond linear drops I knew right away that they were going to be mine.  They have clean lines, classic styling and great movement (all the things I love in a piece of jewelry).

I got home and went to the Ippolita website, in search of a picture (better than one I could take) to post - and couldn't find them.  I typed in the style number written on my receipt, and got an error message that read "SORRY THERE ARE NO RESULTS FOR THAT ITEM NUMBER".

Well, I knew that wasn't true - because I bought them.  So I searched a little more with keywords...


but not the ones I purchased.

So I called Ippolita, and asked...turns out that they take samples and one of kind pieces to trunk shows - and that's the only place you can find them.

I am thrilled!  Not only do a I have great new pair of earrings - that look fabulous with my lost wax pendant - but they are unique, which makes them extra special. 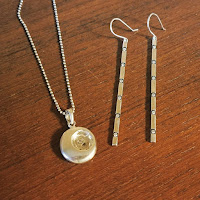 I encourage you, any time you can, to attend trunk shows - you can talk to the jewelry artist or their representative, learn more about the brand, and often find something really special for yourself or a gift.

There's still a week until Hanukkah and Christmas - I hope, if you are still shopping, you will seek out local holiday fairs and trunk shows at your favorite independent jeweler.


Whatever your celebration over the next few days - I hope it is full of sparkle.

(and you thought I was going to say 'ooray!)

I'm having a really busy holiday season - so this post will be short.  But I didn't want to miss a week so close to the end of the year - and I am absolutely going to find time to go to Russell Korman for their Ippolita trunk show on Wednesday (December 14).

As fine jewelry companies go, Ippolita - founded in 1999 by Italian artist and designer Ippolita Rostagno - is a relative newcomer.  Her contemporary pieces featuring precious metals and gemstones are some of my favorites - and they transition beautifully from casual to dressy wear.

I have several pairs of her earrings - and I love mixing her high end dangles with some of my most "low end" necklaces.

I wrote one of my first posts about wearing these blue "Rock Candy" doublet earrings with a $20 necklace of glass beads strung on waxed cotton. 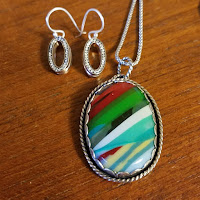 There are a lot of things I really like about Ippolita in addition to the clean, simple shapes - it is one of the most colorful lines of fine jewelry I've ever seen. Additionally, because she works in silver as well gold, many of her pieces are very affordable (making it easier for me to justify buying a pair of earrings almost annually!). 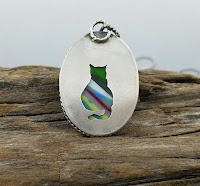 Recently, I've been wearing my oval diamond "Stella" drops with a pendant I made from a piece of reclaimed surfboard resin. I love the bright colors, and decided that it needed something whimsical on the reverse - so I gave it a fat tabby cat. I had so much fun making this one I decided to keep it.

That's it for this week - like I said, short and sweet (but it still counts, right?).


Don't miss your chance to shop locally for this great jewelry line in Austin - the staff and IPPOLITA reps will be there from 10 a.m. to 6 p.m. on Wednesday (the jewelry is always there) - so swing on by, perhaps I'll see you.  If not, tell them Deb sent you!

In case you've forgotten, you can find Russell Korman at 5011 Burnet Road.

Until next time.
Posted by Debra Haas at 10:36 AM No comments:

Last week I visited the Texas School for the Blind and Visually Impaired - as I have done for many years - to share music and stories about the Nutcracker with the students there, before they attend a Ballet Austin school show performance.

I'm reprising this post from last year, because it really captures how I feel about the Nutcracker, and the gift that the TSBVI students give to me, by letting me visit with them each year as the holiday season approaches.

When my daughter was 3 years old, we were invited to a mother-daughter event to see Ballet Austin's production of Cinderella.  For more than 2 hours, she sat on the edge of her seat, and when the curtain went down and the lights went up, she said to me "Mommy, I'm going to be a ballerina".

My response was "of course you are" - because all 3 year old girls want to be ballerinas.

However, my girl really DID go on to be a ballerina; for 14 years she danced at the Ballet Austin Academy, and for 10 of those years she was part of the annual cast of the Nutcracker (she STILL dances for fun and exercise).

My daughter was so excited to be cast as an angel her first year, and I bought her a James Avery angel charm, and had the date engraved on the back, as a keepsake.  The next two years, she danced as a mouse in the battle scene, so I bought mouse charms, and by her fourth year, it occurred to me that maybe instead of putting these charms on her regular charm bracelet, they needed to be own their own...so it was...that over the course of those 10 years we created a shiny record of all of her performances.

I confess, I tired of the schlep to rehearsals and the theater, and saw the production more times than I can count...but I got involved in my own way.  I became a docent - going into schools in the Austin area to talk to elementary school students about ballet and what they will see when they attend the performance.

Being a docent is hands down my favorite part of the Nutcracker.  There is something so special and fulfilling about the opportunity to bring an art form I love to students, who often, have never seen a live performance.  For most of my presentations I rely on the wonderful materials provided Ballet Austin Community Education staff.  In addition to the presentation itself, each docent receives a bag chock full of props including, of course, a Nutcracker. For the past several years I’ve also been the docent for a particularly special group of children – the students at the Texas School for the Blind and Visually Impaired - and I was excited to see them again last week.

When I was first asked to do the presentation for TSBVI, I was already an experienced docent.  I said “yes” without a full appreciation of what I was taking on.  I knew the students would have little or no sight, but what I did not know what the range of other special needs the residential school serves.  Some students are sight impaired, but very high functioning in other areas, and some have much more severe disabilities and special needs. Fortunately, the school has a wonderful music teacher who gave me great advice on what would spark their interest and be appropriate for her students.

Being the docent for TSBVI made me think about ballet in a way that goes beyond the visual.  To bring the Nutcracker alive for these students I focus on their other senses.  Students hear the story through descriptive audio services when they attend the performance at the Long Center, and Tchaikovsky’s fabulous score provides signature phrases for many scenes.

In the first act, there is the ominous music that precedes or indicates the arrival of the Rat King.  At the end of the act, there is snow - which does not fall silently – but as the rhythmic tapping of 32 perfectly timed pointe shoes moving across the stage.  In the second act, each "sweet" has their own musical theme, and as we listen I ask students to imagine the taste and smell of coffee, tea, cinnamon, chocolate, almond and peppermint.

The students also love the costumes. Over the years I’ve made a point of taking well embellished tutus so that students can feel the beading, embroidery and tulle – allowing them to “visualize” the garment in their minds - truly creating visions of sugarplums.

My daughter is in college now, and we attend a performance every year when she is home.  But it is my time with these special children that really helps me to "see" the beauty of this "holiday gem".

Posted by Debra Haas at 9:55 AM No comments: