actually, it's probably me who is smiling, because the Rio I am referring to is Rio Grande Jewelry Supply...and if I'm on their website, it means I'm buying more supplies!

Remember how Stefon (City Correspondent for SNL) said "this place has EVERYTHING"... 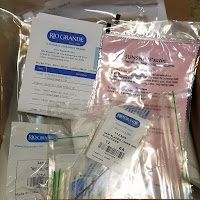 Well, they really do - and these days my average order with them is several hundred dollars of silver wire, sheet, chain - pretty much everything I need to make my pendants and earrings.  Not just metal - they are a one stop for all things jewelry. 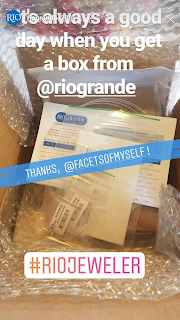 I got so excited the last time a box arrived, I posted it as an Instagram story - and the Rio shared it!!

I also love their customer service...

my favorite pair of pliers has replaceable nylon jaws.  I use them all the time, and I love them because they don't leave marks on the metal.  After a while, the jaws got thin, and the screws were starting to poke through, so I ordered a replacements.  When the new nylon pieces arrived, I took the screws out of the old ones and tried to put the new ones in place...except...they were the wrong size.

I thought perhaps I had ordered incorrectly - so I called Rio, and after a bit of back and forth it turned out that while the part number had stayed the same, the pliers (and the replacement jaws) were actually different from the ones I had ordered a year before.


For some companies, that probably would have been the end of it - but instead - one of their parts managers said he would investigate and in the mean time, sent me a new pair of pliers, no charge.

Their folks are great in person, too. I had the opportunity to meet a few of them when they came to Austin to visit Creative Side to talk with the staff and members (like me) about our journey as makers.

When you watch the video, you will see why I love being in the studio with these amazing, creative people.  If you look carefully, you will also see the frog pendant in progress! 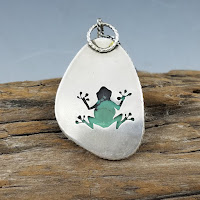 We live in tumultuous, stressful times, but thanks to Rio, I can keep calm and solder on.

Last time I gave you a sneak peek at my fused glass rainbow earrings...now here's the rest of the story.

After doing the square plate in class, the next project was to learn to cut a circle (using a lens cutter) and make a round plate or bowl.  One of the examples our instructor showed us used reeded glass - which has tiny ridges like corrugated cardboard.

When you set two pieces together at 90 degree angles and fuse them - you trap tiny air bubbles in a grid. 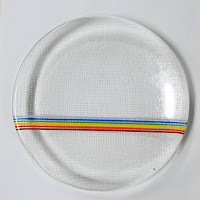 The plate turned out beautifully, and I was so pleased - I was ready to give earrings a try!

Our last class was essentially an open studio, where we could fill a kiln shelf with pieces of our choosing, so I decided to devote my time and shelf space to a whole bunch of earring dangles.

I made some short ones and some longer ones.  Some skinny ones and some wider ones...all in an effort to figure out what would work best.

The short and skinny ones failed at a pretty high rate, only half of them were usable.  The best ones were about half an inch wide and just over an inch long, so that was what I did for my first production batch. 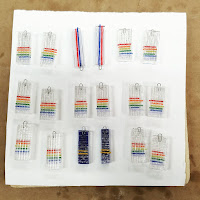 I added a couple of other experimental designs - one with horizontal stripes in my college colors, and another with vertical stripes - just to see how they would turn out.

The answer is - great - they all turned out beautifully!

I had several pre-orders based on pictures I'd posted of the prototypes, so I filled all those, they went to friends who had seen them and said, "oh, those are so happy" (which they are) so I am calling them my Happy Rainbow Earrings.

Then I put up a listing for the rest in my Etsy shop.

It didn't take too long to have my first sale...and the buyer asked if they could be sent as a gift? I said of course.

We exchanged messages, and she explained to me that they were for the mother of her son's soon to be husband - and my heart just about exploded with happiness. 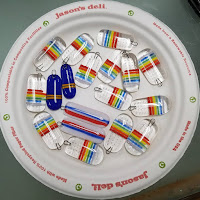 I posted this story on my Facebook page, and I also learned a new word - machatonim - which is the Yiddish term for the parents of the people your children marry.  My mother used to say we are all mishpacha - family - and wasn't really concerned with who was an aunt, a cousin, or if you were once or twice removed...but I never heard her use this term.  It's my new favorite word.

I've always loved stripes and rainbows and all that they might symbolize. I didn't set out to make a statement with these earrings...but nothing could make me happier than knowing they were sent as a gift of love and friendship between two moms, two families, whose sons will soon be married. 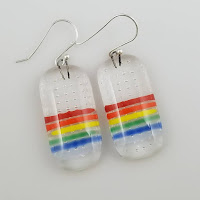 I hope this story fills your heart as it did mine, and that you, too, find happiness in rainbows.