You would think, as much as I love earrings, that I would make a lot of them - right? Except, I haven't...at least not until now.

I mean, I have made some - mostly in classes - like the hollow forms I made in Fabrication 201, and the pairs I made in the week long argentium class with Ronda Coryell... 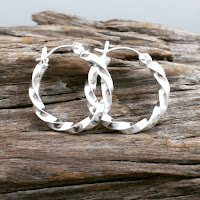 but until very recently I'd been making almost nothing but pendants.


I can think of several reasons for this - not the least of which is earrings are too small to put a cutout on the back, and to make a pair of bezel set earrings is almost twice as much work as making a pendant.  Not only do you have to do everything twice, the bezels are much smaller, and they are much easier to melt. 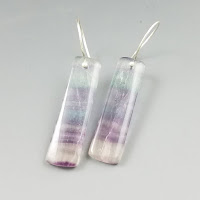 But then a friend told me she wanted a pair of earrings - and was pretty specific about what she was looking for...she wanted them to be stone, have both pink and purple, and be dangly.  Well, two out of three would have been pretty easy - but it took me quite a while to find something that filled the bill.

I looked and looked, and came upon a lovely pair of matched fluorite bars - but they were drilled - so instead of bezel setting them, I asked her if she would be ok if I just made some custom earwires? She said yes - and suddenly a whole new set of design ideas came into my head.

I realized that not every piece has to involve sheet and solder - but finding great stones and giving them elegant, hand formed earwires gives me the opportunity to make beautiful pieces that are not as expensive as my pendants (but do go with them very nicely) - because they don't require as much time, or metal.

In my bead box, I had some drilled sea glass, collected over year of trips to the bead store in the Outer Banks - and I thought - what the heck, I'll make earrings out of those, too.

Finally, I decided to create some simple silver earrings with small stones - which do involve a little bit of metalsmithing - and can be replicated because I can buy multiples of the 6 mm turquoise and coral cabochons. 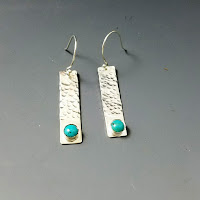 I'm really pleased to be able to put some smaller pieces - at lower price points - in my shop...especially when it means I can still make beautiful things when I have a little less time to work with.

I hope you'll go check out the earrings - as there are more on the way.

"Think of the magic of the foot, comparatively small, upon which your whole weight rests. It's a miracle and the dance is a celebration of that miracle." -Martha Graham

I've written about the Austin dance community before - it is a subject near and dear to my heart.  We have been involved with Ballet Austin - as parents and patrons - for more than 15 years, and have had the joy and privilege of getting to know many of the dancers and choreographers.

Through these connections I was fortunate to become engaged with an emerging company - performa/dance - and I now serve on their board.

I can't overstate the respect and admiration I have for these people as individuals and as artists.

One of the things I have learned since I have started making jewelry is how little value some people place on the creation of art.  I don't know an artist who hasn't been asked if they have a "real job" or if they can offer a "better price"...implying that somehow making art isn't a worthy pursuit or profession.

The creation of art not only involves vision - it takes time, training and skill; and the easier the artists make it look, the more difficult the result was to achieve.  I know this not only from my own growth as a jeweler, but because I have watched these choreographers and dancers spend countless hours working to create a piece that will be performed - and finished - in a matter of minutes.

Dance is particularly ephemeral - music and movement come together on the stage for an evening - and then they are gone.  The primary difference between the performing arts and visual or industrial arts (like metalsmithing) is that permanence. 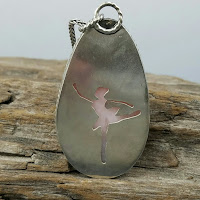 When I saw this beautiful opal my first thought was that the color was "ballet pink"  - and I wanted to capture the fleeting moment of a dancer en pointe - on the back. This is probably the most intricate piercing I have done so far - the dancer suspended in time and space - and it is really satisfying.  It is also a small tribute to the artists whose work inspires me every time I watch.

If you are in Austin, you can join me and share in the experience - performa/dance has two shows the weekend of June 23 and 24 in the Austin Ventures Studio Theater at Ballet Austin.  Tickets are available at www.peformandance.org.

If you aren't in Austin - I hope you will seek out and support the performing arts in your community.