In most places, today - Memorial Day - is the official start of summer, and although we had a really pleasant spring here in Austin, we have already hit 90 (more than once) and turned on the AC.


Surfite falls into the category of "one man's trash is another man's treasure" in the same vein as Fordite, or Detroit agate, in which layers of car enamel are cut into cabochons by lapidary artists as if they were stone.

I first spotted it on Instagram when Nicole Conklin of Arrok Metal Studio posted some pictures of raw surfite and the cabochons that her husband, Marty, had started to cut from it.

I've been fortunate to get some great pieces from both Nicole and Marty, and Jess Johnson of Cape Fear Resin Works (you should also check out his wife, Cameron, who does beautiful work with enamel and sea glass) to use in my jewelry making.

As you know, when I start a piece, it needs to have a story - so I decided I would put beach themed cut outs on the back of my first batch of surfite pieces.  I love the way the stripes came through on this angelfish, and because when ever we go to the beach we visit lighthouses, I had to cut out one of those.

Recently, I used raw surfite (polished but not smooth) from
Marty at Arroks, in two of my STATEment pendants.

I love using natural stones, but there are so many materials available to work with, it's fun to branch out and try new things - especially when it someone has turned "trash" into something so beautiful.

Until next time.
Posted by Debra Haas at 1:59 PM No comments: 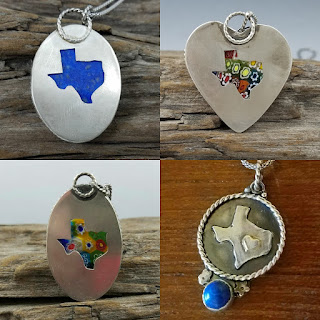 Texas is a big place. If you take a map of the continental US and fold it in half from California to the Carolinas, the Rio Grande Valley will reach into Canada.  If you fold the map in thirds, east and west of the state, one edge, or the other, will reach into the ocean on the opposite coast.

It is also full of proud people - even if we don't always see eye to eye on politics - there are LOTS of things we do agree on...including, but not limited to...

wildflowers (we love them), barbecue (it's all about the smoke and not the sauce), and chili (NO BEANS).

Because I love my adopted home state as much as the next Texan (hey, I've been here two-thirds of my life, and I'm married to a native) I decided to show some Lone Star love by using the shape in some of my jewelry. 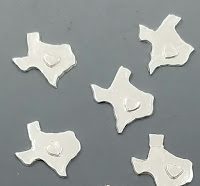 I made little "Texas" charms out of PMC and fused them onto pendants.  Then, after I purchased my Green Lion saw, I started cutting the outline into the back of some pieces.  They were all a huge hit!

As it turns out, Texans are not alone in their state pride or their search for a piece of handcrafted jewelry to express it. 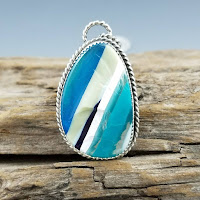 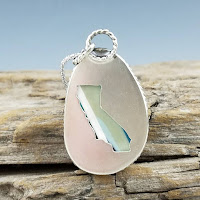 Recently, I've been thrilled to make pieces for friends from California and the state I grew up in, Virginia. 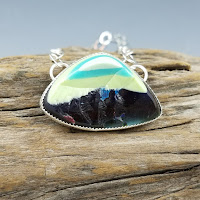 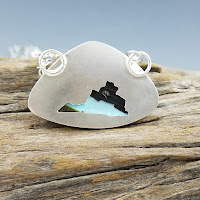 I love telling stories for friends and clients through custom pieces - please let me know if I can make a special piece to share your story.

Posted by Debra Haas at 5:06 PM No comments:

Ostensibly, this is a blog about jewelry, but you (gentle reader) and I both know that sometimes I write about jewelry, and other times I use it as an excuse to write about something else.  This post is very much in the latter category.

A couple of weeks ago we celebrated Passover, which has (almost) always been my favorite holiday - although when I was growing up and my April birthday fell during that week - not so much (because the birthday cake was off the table, so to speak). As an adult, that's not really an issue, and there are so many things I love about Passover - the message of redemption, renewal and hope, the celebration at home with friends and family, and of course THE FOOD!

Since our children were young we have shared the first night Seder with a core group of friends at their home.  Some years the crowd is bigger, some years smaller, but there is a sense of connection and community that moves me deeply, and I look forward to it every year.

So...about the jewelry...earlier this year I had a custom order for a piece with a purple stone, and one of the ones I bought (although the client didn't choose it) was this big, gemmy amethyst.  I love amethyst, and after looking at it for a while I was glad the client decided on something else, because I wanted to keep it. I just had to determine what to put on the back.


I was at the bench a couple of weeks before the holiday - working and thinking through my plans for shopping and cooking - when genius struck - I would put a wine glass on the back! Because we are commanded to drink four glasses of wine over the course of the Passover Seder, this would be the perfect piece of jewelry for both the gatherings we were attending (on the first and last nights). 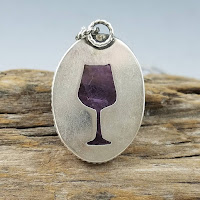 In some years, we had attended the last night Seder hosted by our congregation - but this year we had the opportunity to do something new, different and wonderful!

A few months ago an Italian restaurant opened in our neighborhood, and it has become of our very favorite places. The amazing food and wonderful staff made it easy to become regulars. As it happens, L'oca D'oro is also owned by a member of the Jewish community, and they hosted a last night community Seder.

In some ways, it was very much like every other Seder I have attended since childhood.  The crowd gathered and was seated - some people I knew, some were new to me. The candles were lit to mark the separation between the day that was ending and the one that was beginning. The hosts, Adam Orman, the owner and Rabbi Rebecca Epstein of Congregation Beth Israel, identified the ritual items on the Seder plate and led us in prayer and song.

But...THE FOOD...did I mention I love Passover food (yes, yes I think I did).  Chef Fiore Tedesco prepared the most amazing Passover meal I have ever had! Traditionally, the first "course" of the meal is a green vegetable (usually parsley) dipped in saltwater - but we had fried snap peas in a salty dipping sauce that were divine!

Furthermore, by the last day I am generally doing everything I can do avoid eating another piece of matzo (they don't call it the bread of affliction for nothing).  Not so with Fiore's incredible house made unleavened bread.  Toasty and topped with sea salt, everyone at our table agreed we'd eat as much as was set in front of us.

Everything that followed - matzo ball soup, brisket, a grain free potato and tomato lasagna and flourless chocolate cake - were gastronomic works of (kosher) art...and now, every time I wear my wine glass pendant, it will remind me of the joy of celebrating with my community.

PS - with a busy summer ahead I'm going to drop back to posting every other week, so I'll see you next time - on May 15.
Posted by Debra Haas at 9:29 AM No comments: