When I started this blog, one of my goals was to "make jewelry more than a hobby"...and in the past few weeks, I realized that is exactly what is happening. 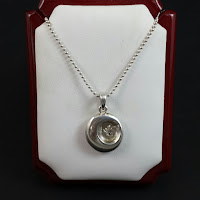 When I made my lost wax pendant over a year ago, I put a simple silver jump ring on it and wore it happily.  Then I put it on a few weeks ago and thought it didn't look "finished" and it needed a bail.  I went to the Rio Grande website, and found a lovely argentium bail that looked like a perfect match to my pendant. I ordered it and took the pendant and bail to open studio, where replaced the jump ring.  I couldn't believe the impact of that small change, it looked like a completely different - and truly finished - piece of jewelry.  The jump ring was just a way to hang the pendant on a chain, the bail truly completes the piece.

In some ways, telling this part of the story first is putting the cart before the horse... 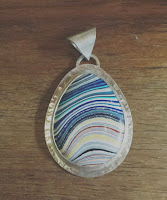 I started thinking about bails in my Fabrication 101 class, when I began making pendants.  The first one, for my Fordite pendant was incredibly simple; the wire one I made for my laboradite was a little more advanced - the bail followed the shape of the prongs.

As I started working in open studio I began to think more and more about think about the bail as an important component of each piece.  So much so that I ordered a bail template and some specialized wire to customize each bail to the piece.

Having the template is great - I made paper versions of each bail (something I'm doing a lot right now - mocking up pieces with paper - to get a sense of how they will look) - which I can use to to see exactly what size I want for the piece.

This is how I know I am starting to think like a jeweler - I see the components separately, but think of them as something much greater than the sum of their parts.

Watch this space for more bails! 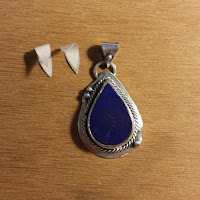